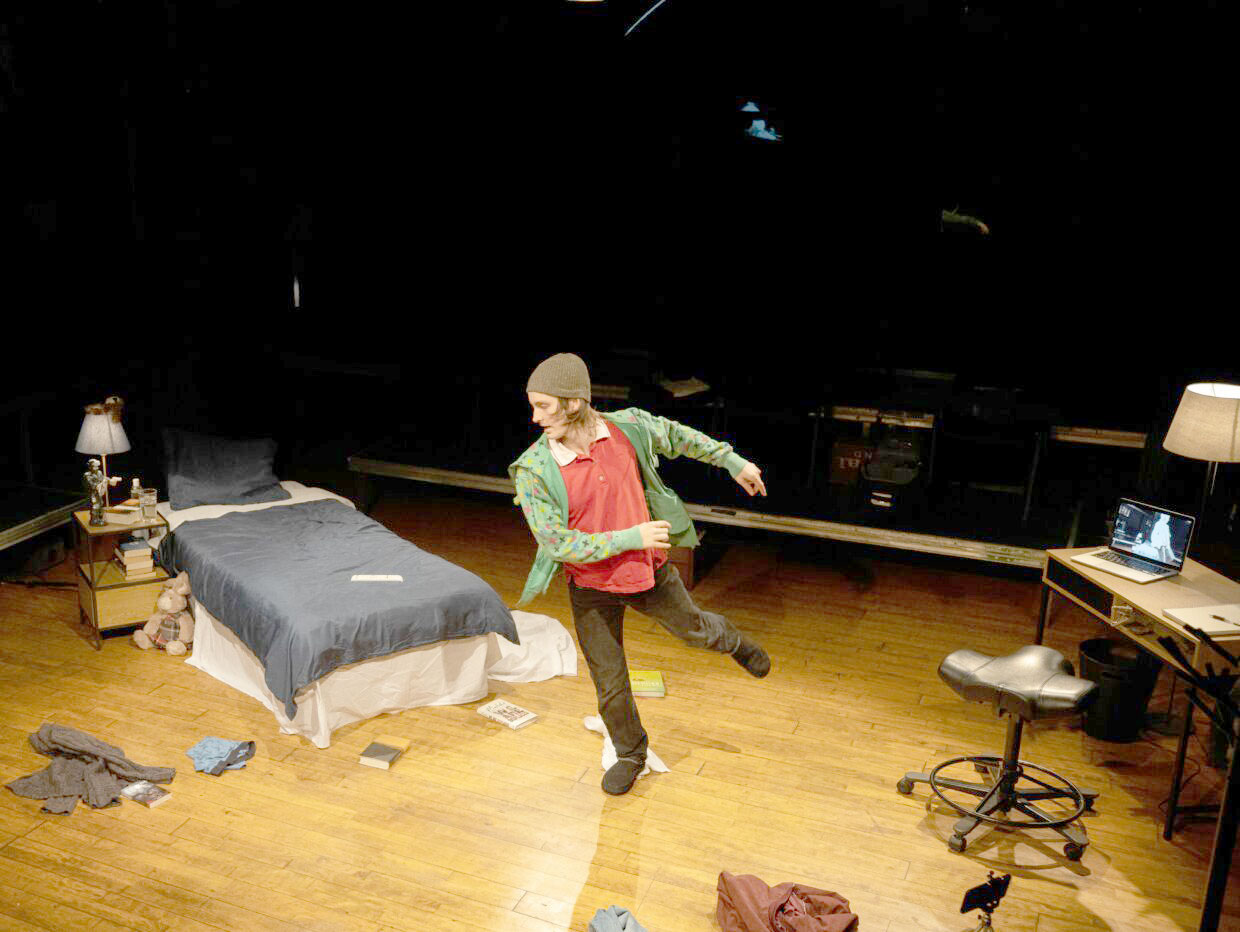 This bitter-sweet tender comedy was a sell out for HIT in 2020, now is your chance to follow on stage one 17-year-old, and his digital universe, a potent manifesto and brilliant one-man play, which reveals Callum’s intimate thoughts about sexuality, society and his quest for acceptance.
(Venue: Literaturhaus) 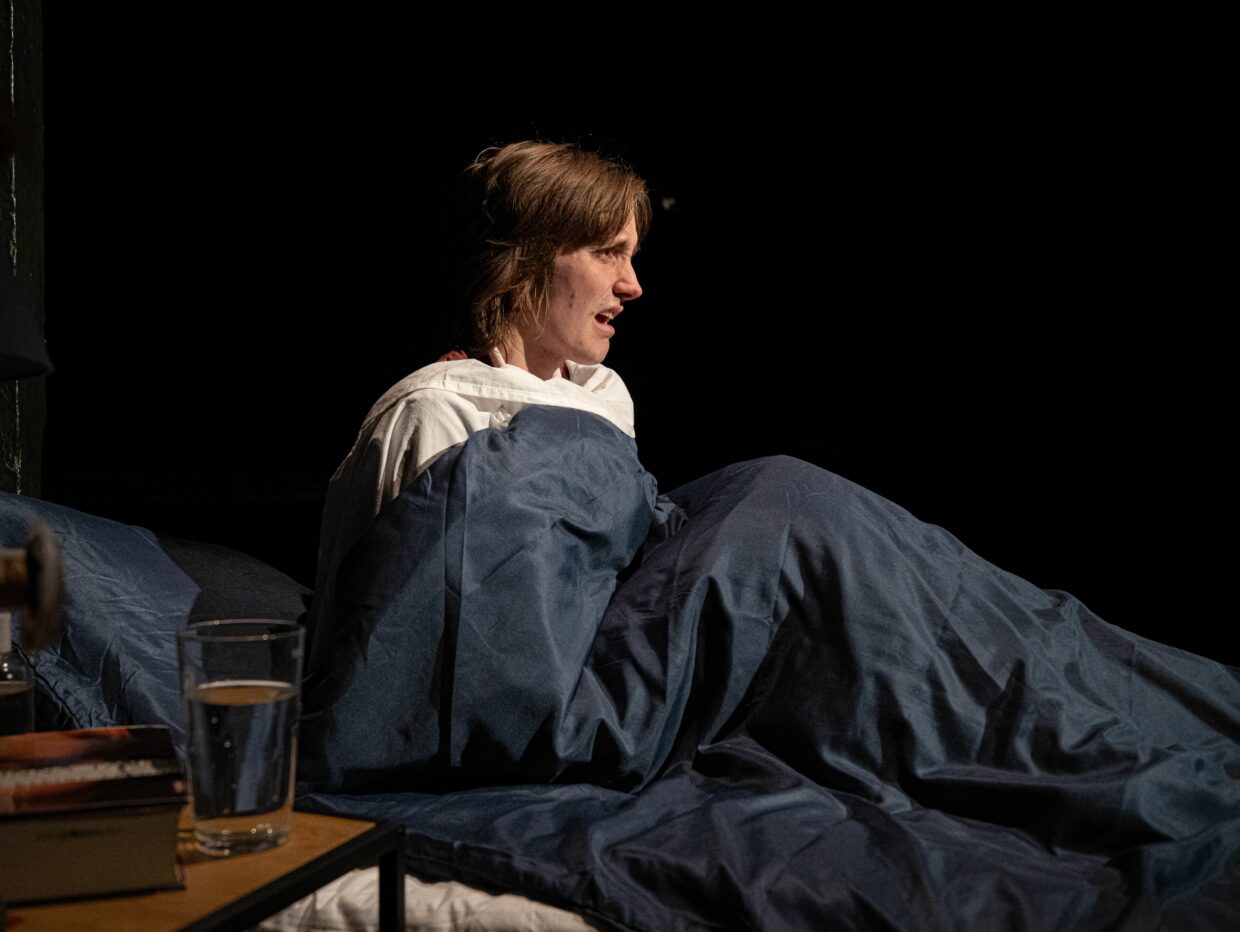 Actor Daniel Ash:
“As Callum the protagonist, he could be revealing a great tenderness and then whoosh … the horrific character of his mother’s friend Libby or Tyrone, the hitherto only gay in the village, would be brought into action seamlessly – and with no aftertaste of the previous occupant, not even a swallow. That’s quite a skill.”
(/Review: The Cph Post, 16th October 2020, by Ben Hamilton)
https://cphpost.dk/?p=119431

“Last night I tried not to be shy, just as an experiment for one night – and with catastrophic results.”
/ Harry in The Shy Manifesto

The Shy Manifesto is a tender, bittersweet coming-of-age dark comedy  from 2019, about growing up shy and along with the pressures and double-edged sword of the social media age. 17-year old bookworm Harry, stuck in  Bournemouth, is surrounded in life by overconfident people. He has pretty much only his own room for company and decides to face his own demons after the utter chaos of his drunken escapades last night.

This play is as hilarious as it is poignant. Through the digital universe of his vlog, Callum delivers a potent manifesto, which reveals his intimate thoughts about sexuality, society, humiliation, self loathing and ultimately his quest for acceptance.

Shyness has rarely been explored in drama and in this piece, peppered equally by hilarious and poignant moments, “the writing is a gift to actors: light and energetic, lacking in pretension and full of compassion.”
(The Guardian).
This piece of theatre coaxes trust from the audience and explores whether shyness should be accepted or whether it is something that needs to be conquered. 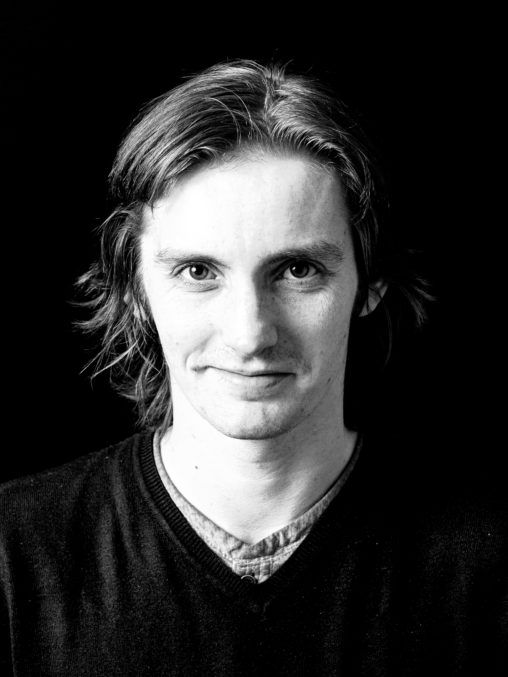 Daniel Neil Ash is an actor from Hull, East Yorkshire. He trained on the foundation Course in Acting at the Oxford School of Drama before acquiring credits in several short films, touring theatre and working extensively in Theatre in Education. In 2016 he left The UK to train at the Copenhagen International School of Performing Arts (CISPA) and is currently basing himself in Copenhagen. https://danielneilash.wixsite.com/portfolio

DIRECTOR:
Jeremy M. Thomas is the Artistic Director for Down the Rabbit Hole Theatre and Local leader behind House of International Theatre. Originally from America, he has been directing and producing theatre in DK, Norway, Sweden, UK and Hamborg for the past 10 years. In Copenhagen, his most notable work in English, includes Old Times (2020), The Clean House(2019), as well as, Vanya and Sonja and Masha and Spike (2018).

The Shy Manifesto is the final work by British playwright Michael Ross, who died aged 40 in 2019. It has toured successfully all over Britain to critical acclaim and is now playing for the first time in Denmark. Michael Ross was a graduate of the Royal Court’s Young Writers Programme and in his plays tackled contemporary issues such as social media, housing, homelessness and corporate greed.

Produced by Down the Rabbit Hole

Presented by House of International Theatre

HIT’s participation in CPH STAGE as HIT hits the Stage is graciously supported by the Aage og Johanne Louis-Hansens Fond.

The Shy Manifesto by Michael Ross, along with Harry Clarke by David Cale, are powerful, revealing and compelling monologues and a tour de force for any actor. Both one-man plays are being performed as part of HIT’s season focusing this year on LGBTQ+ oriented plays, leading up to HIT’s participation with dramatic works on stage during Worldpride 2021, which will be held in Copenhagen.

THE SHY MANIFESTO is one of five HIT plays this spring being performed under CPH STAGE as a part of HIT’s international festival – HIT hits the Stage.